The Tóchar Phádraig
FAQ
About
Contact Us
The Tóchar Phádraig is a ~1500-year-old Irish pilgrimage from Ballintubber Abbey to Croagh Patrick, the holy mountain of St. Patrick. The 35km (22 mile) path – which traces an ancient chariot road – crosses over 100 stiles in County Mayo, Ireland. It winds by fairy hills, ancient ruins, and mystical sites where the legends of St. Patrick live on today.

Each year, hundreds of pilgrims from Ireland and abroad walk this royal route to experience medieval Ireland and its holy heritage.

What is the Tóchar Phádraig?

Tochar Paidrig (also known as “The Pilgrim Path to Croagh Patrick” or “St. Patrick’s Causeway”) is a medieval Irish pilgrimage route in beautiful County Mayo. Before its Christianization, the path was a chariot road used to connect the historical Kingdom of Connacht to Croagh Patrick. Deep local folklore and ties to St. Patrick make the pilgrimage a richly syncretic blend of Celtic mythology and Catholic legend.

The route is dotted with important sites from both pre-historic and post-Christian Irish lore. Among them, travelers will find the The Well of Stringle, where St. Patrick himself is said to have performed baptisms; Creggaun ‘a Damhsa (“The Knoll of Dancing”), where fairies are said to dance and prance; and the tiny village of Aghagower (meaning “The Plain of the Springs”), where several important artifacts are preserved (like the Neolithic Boheh Stone, later Christianized as “St. Patrick’s Chair”).

Other sites along the route are quite tragic and solemn. Pilgrims will pass village and church ruins once afflicted by the great famine, like Teampleshaunaglasha, and the dark Lough na gCeann (“Lake of the Heads” or Lough Nagowan), where the despised priest hunter named Sean na Sagart is said to have disposed of his victim’s heads.

The Pilgrim Path to Croagh Patrick is not a particularly long journey. At a breakneck pace, St. Patrick’s Causeway can be walked over the course of one day. At normal speeds, it takes two days of hiking. When the weather is rainy, the boggy landscapes and muddy paths can make the Tóchar Phádraig more difficult to traverse -- see “How do I prepare for St. Patrick’s Causeway?” below.

PLEASE NOTE: Although The Pilgrim Path to Croagh Patrick can be done at one’s own pace and any time of year, pilgrims must register with the Ballintubber Abbey Trust before walking and agree to certain rules. See “How do I register for the Tóchar Phádraig?” below for more details. 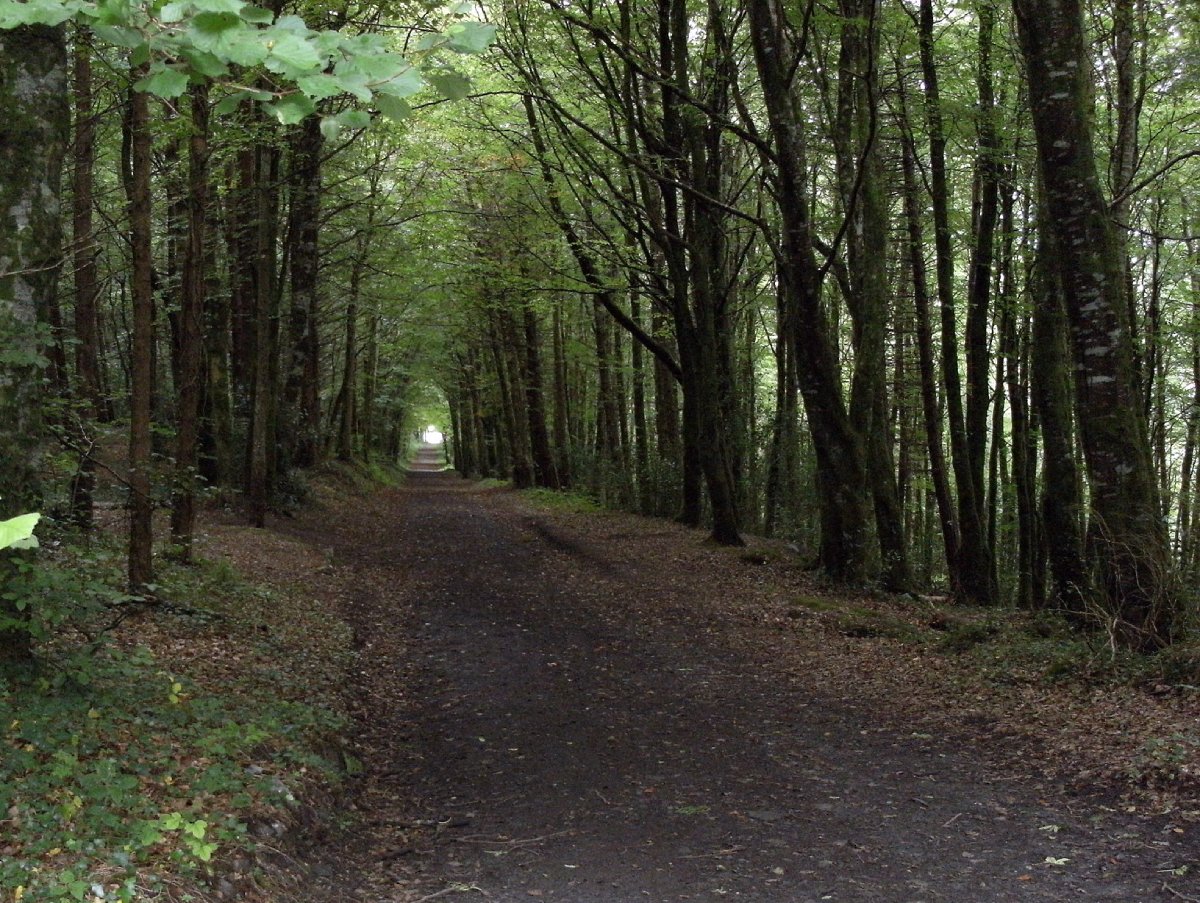 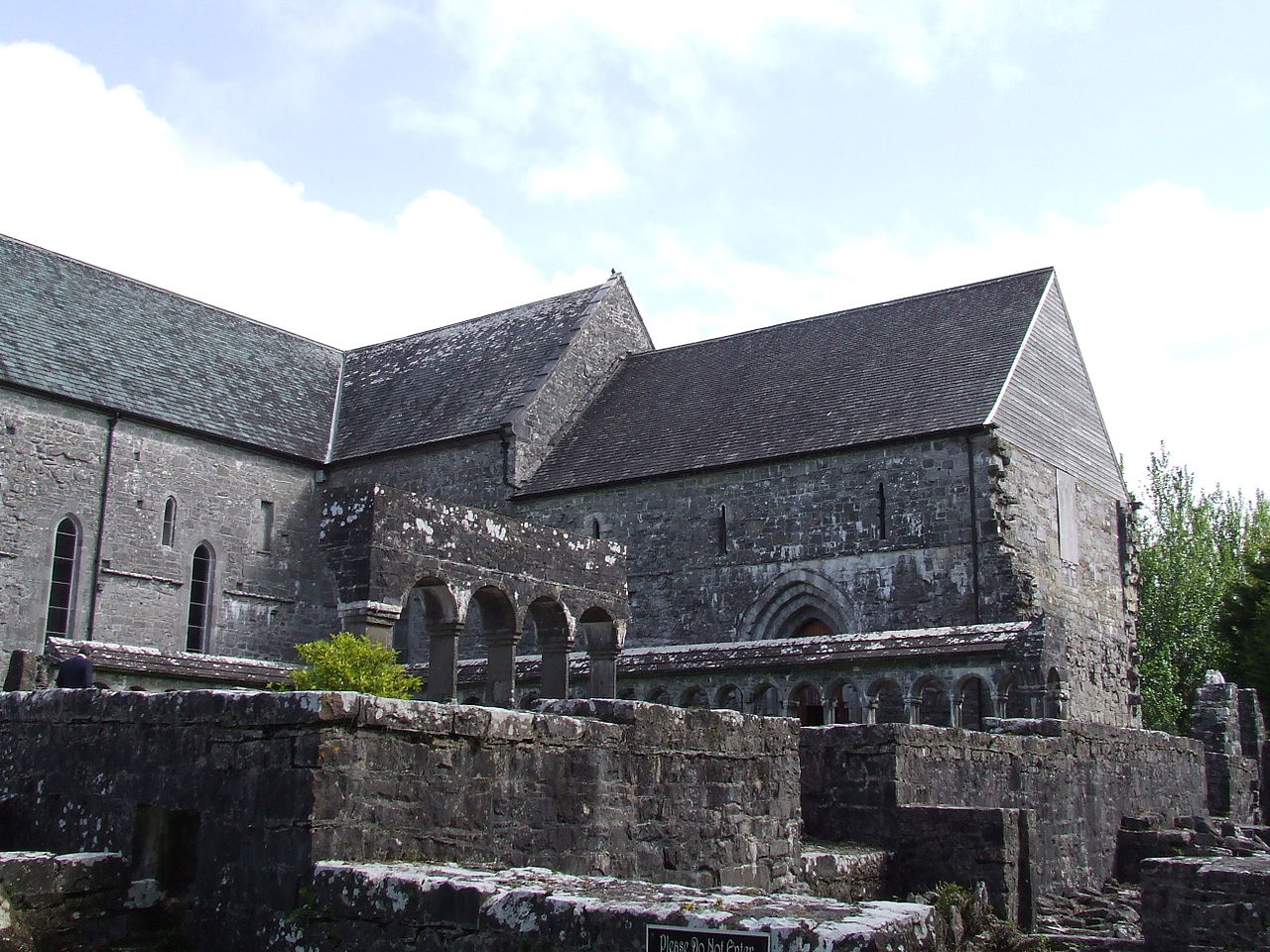 History of the Tóchar Phádraig

The Tóchar Phádraig pilgrimage was originally a chariot road that began from Rathcroghan – the old capital of the Connachta from which the kings and queens of Cétchathach ruled western Ireland. It stretched all the way to the mountain of Cruachan Aille (known today as Croagh Patrick).

Sometime between the fifth and sixth century, St. Patrick spent time in the area, performing holy acts and sparking legends. Because of its association with the saint and the holy mountain, pilgrims began walking to Croagh Patrick along the path out of penance, and the route earned its name as “St. Patrick’s Causeway.” One’s journey often ended with a hike up holy Croagh Patrick; today, the Croagh Patrick Pilgrimage is often seen as a separate journey from the Tóchar Phádraig, although devout pilgrims still combine them.

In 1216, the Augustinian Ballintubber Abbey was built with a hostel for Tóchar Phádraig pilgrims. Remains of the hostel, once known Danchora (“Bath of the Righteous”), can still be seen on the abbey grounds today. Ballintubber Abbey became the de facto point of embarkation for the pilgrimage.

In the late 1500s, the historic road fell into disuse. And during the enactment of Penal Laws in Ireland, its use as a pilgrimage path dissolved altogether (as was the case with almost all pilgrimages in Ireland at the time). St. Patrick’s Causeway sat in disrepair for hundreds of years.

In 1960, Ballintubber Abbey was refurbished, and today stands as a shining example of Romanesque architecture. In 1987, work began to rediscover the pilgrimage’s history and restore the Tóchar Phádraig trail. Easements were established, route markings were posted, and informational placards – known as “Legends” – were erected along the way. The Tóchar Phádraig became part of the official “Pilgrim Paths of Ireland,” established in 2013, and today is maintained and governed by Ballintubber Abbey Trust.

How do I register for the Tóchar Phádraig?

Because the Pilgrim Path to Croagh Patrick relies heavily upon the goodwill of the private landowners through which it passes, all pilgrims must first coordinate their journey with the Ballintubber Abbey Trust. It can be walked at one’s own pace and time of year, but a few rules must be followed. From Ballintubber Abbey’s official website (as of July 2022):

To register for the St. Patrick’s Causeway pilgrimage, one should call the Abbey at (094) 903-0934 or email them at [email protected] ahead of their planned journey.

Additionally, one can walk the Tóchar Phádraig in an organized group. Details of such expeditions can be found on Ballintubber Abbey’s website. These groups tend to be scheduled around major Irish Catholic holidays (like Easter), and return transportation is typically provided. Because Reek Sunday (also known as Garland Sunday) is an annual day of pilgrimage in Ireland which coalesces around Crough Patrick and the Crough Patrick Pilgrimage, there is a popular Tóchar Phádraig group organized around then. 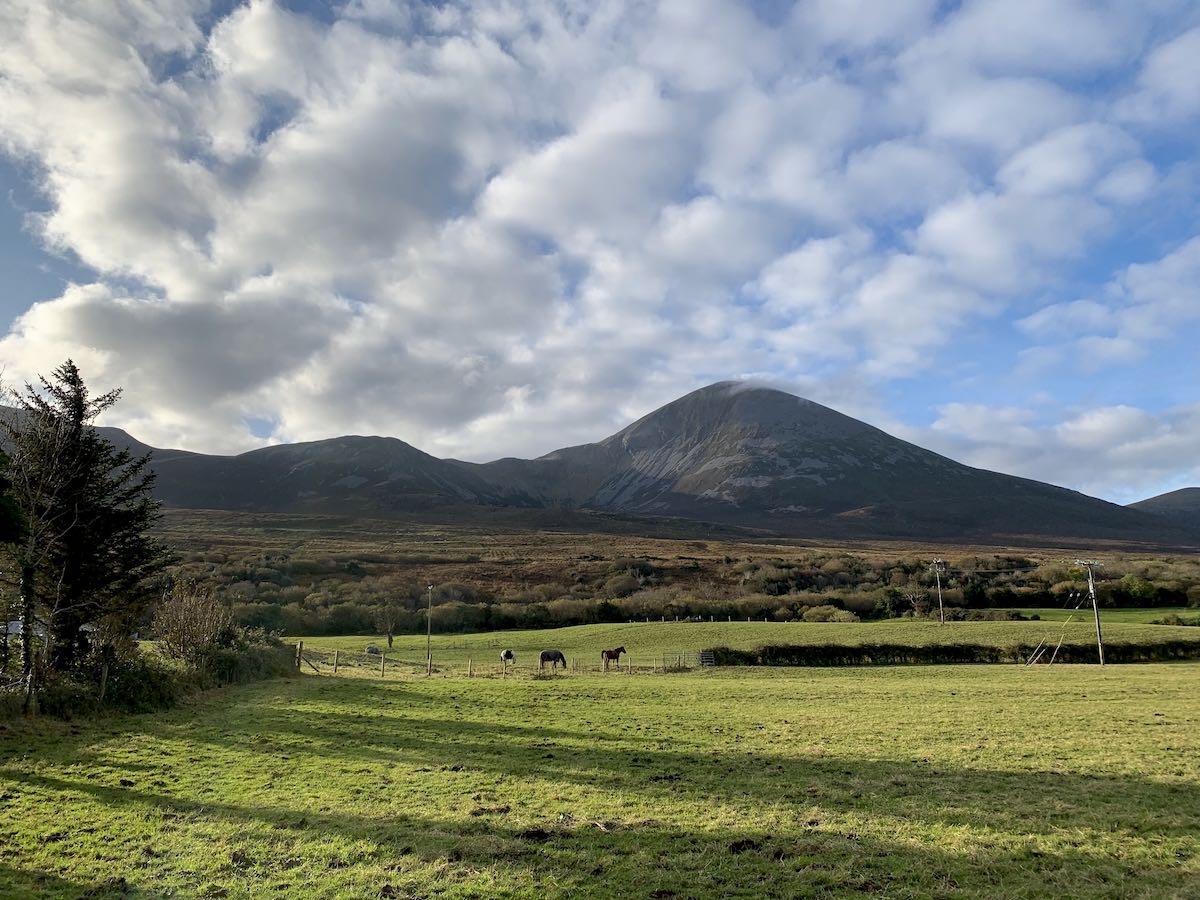 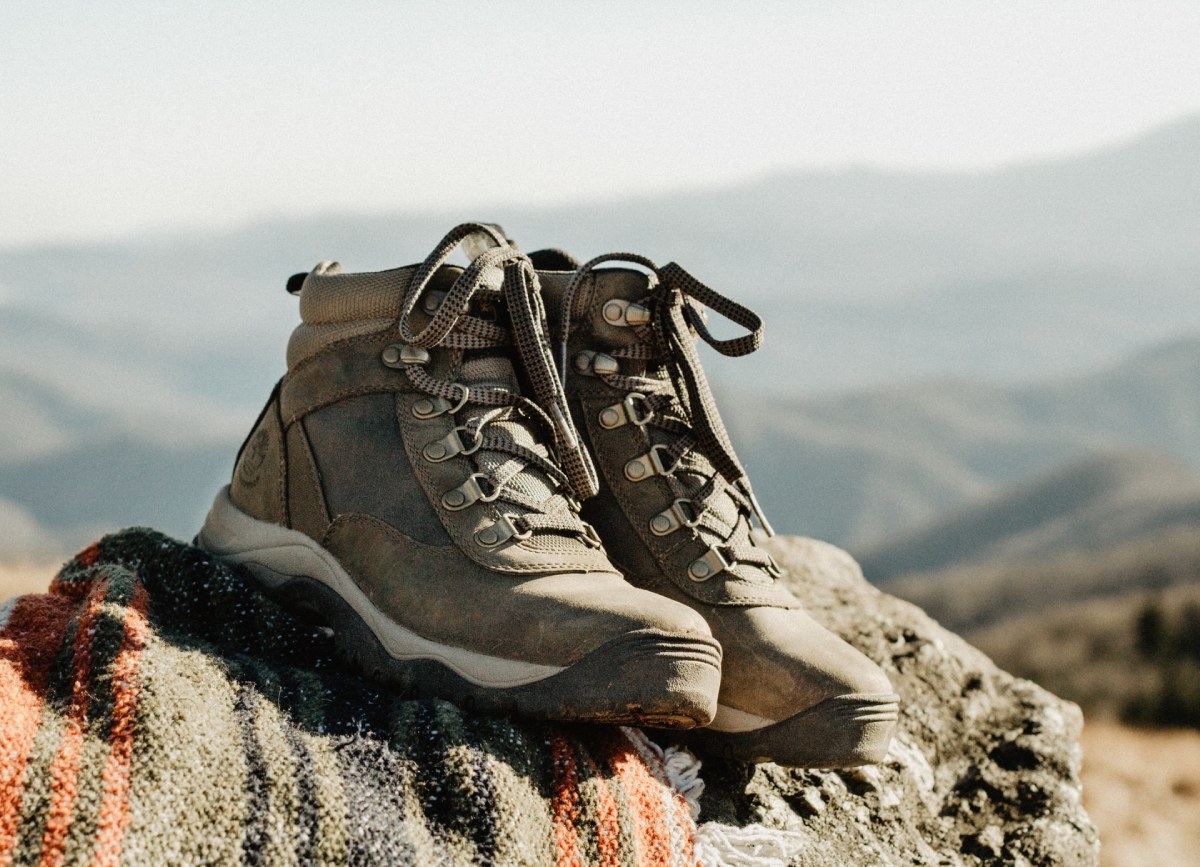 How do I prepare for St. Patrick’s Causeway?

For multi-day trips, there are a few hostels, B&Bs, hotels, and campgrounds along the Tóchar, depending on how you prefer to travel. There are also sparse food options along the way (selection improves greatly closer to Murrisk village). All locations can be found on our free pilgrimage map, which pins places along the way:

While the Tóchar Phádraig is not a particularly strenuous hike, one should be prepared to deal with inclement weather. Check the forecast beforehand. Much of the terrain is boggy or rocky, and can be difficult to traverse after rain. Inasmuch, good gear is essential:

Do I have to be Catholic to do the Tóchar Phádraig pilgrimage?

No, there are no faith-based restrictions placed on those who want to experience Ireland’s camino-style pilgrimages. In fact, non-Catholics tend to be deeply moved by their pilgrimage journeys. That said, you should be respectful of the route’s rich heritage and traditions, both Catholic and Celtic. You should also travel with an open heart and mind.

In the words of a 10th Middle Irish poem, which is sometimes printed upon pilgrim certifications in Ireland: “The gift of piety, the gift of pilgrimage, the gift of repentance for my soul, O Christ without reproach, grant them all to me.”

How much does the Tóchar Phádraig cost?

The St. Patrick’s Causeway pilgrimage is a 1-2 day journey; for many, the biggest expense is the cost of transportation to Ballintubber Abbey. Otherwise, one should plan to bring enough funds to cover one night of accommodation (€50 - €100), the fee paid to the Ballintubber Abbey Trust (€15), food and water for a day (€40), cash for your pilgrim passport and souvenirs (€30), and suitable emergency funds.

Is there a Tóchar Phádraig pilgrim passport?

Yes! Pilgrim Paths Ireland administers both a Pilgrim Passport and the Teastas Oilithreachta (Pilgrim Certificate of Completion). The passport can be purchased for (€5). You can collect stamps proving your Tóchar Phádraig pilgrimage at Ballintubber Abbey (start) and at Campbells at the Reek in Murrisk village (completion).