History of the Shikoku Pilgrimage and Kukai

Kukai and the Shikoku 88 Pilgrimage

The Shikoku Pilgrimage (四国遍路) is one of the oldest, most popular, and most revered pilgrimages in Japan. It is a ~1,200km (745 mile) route to 88 Buddhist temples around the island of Shikoku. Every year, pilgrims from around the world conduct this journey by foot, bicycle, motorcycle, car, or bus. No matter their motive or mode of transportation, these pilgrims are known as “henro” (遍路) or “o-henro-san” (お遍路さん) (the honorific version).

The Shikoku Pilgrimage started roughly ~1,200 years ago. Although its establishment is often attributed to a man named Kūkai, its development and popularity originate from the collective efforts of several historical figures. In fact, documents show that Kūkai only ever personally traveled to a few mountains on the island where some of the temples are located. His two predecessors, En no Gyoja and Gyogi had inspired many of his works and laid the groundwork for a pilgrimage.

Contrary to popular belief, Kūkai did not build all 88 temples which form the pilgrimage today. He never circled the island, nor did he perform the first pilgrimage. Nonetheless, Kūkai’s contributions to the prosperity of the Shingon school of Buddhism in Japan and the development of the pilgrimage are of great historical significance, making him the central and most important figure of the Shikoku 88 Pilgrimage.

Kūkai (空海) (also known as Kōbō Daishi (弘法大師), 774-835), was a Buddhist monk and scholar. He was born in Shikoku within the grounds of Temple 37, Zentsuji. His family were members of the aristocratic Saeki family, a branch of the ancient Ōtomo clan. Not much is known about Kūkai’s early childhood. Under the instruction of his uncle, from the age of 15, his studies were heavily concentrated around Chinese classics. However, after a series of power struggles and political allegations, his family’s name and fortunes took a dive by 791. Around that time, Kūkai traveled to Nara, Japan’s capital at the time, to study at the government university, Daigakuryo.

Around the age of 22 and while studying at the university, Kūkai developed a strong interest in Buddhist studies, but did not join any particular school of Buddhism. He returned to Shikoku, his homeland, in search of secluded mountain areas to chant the mantra of the Bodhisattva Ākāśagarbha (Kokuzō). Like many of the aesthetic Buddhists at the time, Kūkai sought to discover answers and spiritual awakening through isolation in the wilderness and by performing good deeds for the people. The areas he journeyed to include Mount Ishizuchi in Ehime Prefecture and a large rock at Tairyuji, the 21st temple of the pilgrimage. Some believe that a cave in Muroto, Kochi Prefecture was where Kūkai finally attained enlightenment. Subsequently, he changed his name to Kūkai. This translates to ‘sky and sea’, describing the view from within the cave. In a Buddhist context, it symbolizes ku - void - sunyata (emptiness); and kai - sea - calmness - Buddha-nature (Bhodicitta).

In 804, Kōbō Daishi participated in a government-sponsored diplomatic expedition to China to learn more about the Mahavairocana Tantra. During the height of China’s then Tang dysnasty, when Buddhism was wide-spread, he studied Tangmi (Chinese Vajrayana Buddhism) under the teachings of monk Huiguo. Thereafter, he founded the Shingon school of Buddhism, a new form of Buddhism different from what was practiced in Japan at the time. He also brought back a large number of esoteric objects and texts. By way of these texts, he introduced thousands of new Chinese characters, known as kanji (漢字), to Japan. Among Kōbō Daishi’s greatest achievements is the invention of kana (仮), a system of writing still used in the Japanese language to this day as hiragana (平仮名) and katakana (片仮名).

In 812, Kūkai was acknowledged as the “master of esoteric Buddhism” in Japan. In 816, Emperor Saga accepted Kūkai’s request to establish a mountain retreat at Mount Kōya. Kūkai spent his final years there, and occasionally returned to Shikoku, but his project was not completed until after his death in 835. According to legend, Kūkai mummified himself while in a deep state of meditation, through a practice called sokushinbutsu (即身仏). It is said that he then entered into an eternal samadhi, and is still alive on Mount Kōya, awaiting the appearance of Maitreya, the future Buddha.

Today, Kūkai lives on as a prominent figure and founding father of Shingon Buddhist, a major school of Buddhism in Japan.

During Kūkai’s time, there was no concept of a formal pilgrimage or fixed routes around the island of Shikoku. Shikoku and its four provinces were part of the Nankaido (southern coast), isolated from the mainland. Transportation modes across the waters were scarce and dangerous. However, the government had began to build national temples (kokubunji / 国分寺) on the island. As more of them were built, several of which were commissioned by Kūkai himself, they attracted more and more followers from different parts of Japan, who would visit these temples one after another. Over time, a circular route began to form, and became more formalized from the 9th century onwards.

The tradition of temple stamps obtained at each temple originated in the Edo Period, when traveling was restrictive and highly regulated. Official guards were posted on many major roads who would often question the legitimacy of travelers. To obtain travel permits, pilgrims had to stick to the main paths and receive a proof of visitation at each temple. Temples began to issue “signatures” that allowed pilgrims some degree of freedom of movement and permission to pass through to the next temple. These proofs of passages evolved to the book of temple stamps commonly used by pilgrims in Japan today.

As the practice of visiting these temples were popularized, guidebooks started to appear in Japan. Shikoku Henro Michishirube, a guidebook for pilgrims written by Shinnen in Osaka in 1687, documented the 88 temples in order. The guidebook helped further stregthen the legitimacy of the pilgrimage and formalized the temples and a route.

The latter half of the 17th century saw a boom in infrastructure in Shikoku to accommodate pilgrims from all over Japan. Paved roads, rest stops, and signposts were erected to help guide pilgrims along the way. In the 18th century, Daishido (大師堂) – a separate temple hall dedicated to Kūkai, were built in every temple alongside the main halls. This was when the culture of o-settai became widespread as well.

One legend related to Kūkai and the Shikoku Pilgrimage is that of Emon Saburō (衛門三郎), the wealthiest man in Shikoku, who lived in the Ukaana area of Iyo Province (now Matsuyama City in Ehime Prefecture). It goes roughly like this:

One day, a wandering monk visited the home of Emon, begging for food. Emon turned him away, but the monk returned the next day. This time, Emon greeted him by throwing into his begging bowl a chunk of human filth. The monk continued to return for eight consecutive days. Each time, Emon chased him away. On the eighth day, Emon lashed out his rage by attacking the monk with a cudgel, knocking his begging bowl to the ground.

The bowl was splintered into eight pieces, and the monk never returned. For the following eight days, Emon’s eight sons died one after the other. After suffering his losses, Emon began a journey around the island of Shikoku in search for the monk Kūkai, to beg for his forgiveness.

During a span of about four years, Emon circled the island twenty times, each time missing Kūkai by a hair (he was always just a bit behind him). Emon then decided to travel in reverse order, increasing his odds of encountering Kūkai head-on instead of trailing him.

On the side of a steep mountain, Emon’s health began to fail and he became desparate. At long last, Kūkai appeared, and forgave Emon for his sins. When asked if he had a final wish, Emon requested to be born as the Lord of his province, so that he could do good for the people there and atone for his sins. Kūkai carved the words ”Emon Saburo reborn” on a piece of stone, and placed it in the palm of the dying man.

Nine months later, a baby was born to the wife of the Lord of Iyo. For years, the baby’s fist remained clenched, until a priest was summoned. When the child’s palm was revealed, a stone with the words “Emon Saburo reborn” appeared. Today, Emon’s grave sits between Temple 11 and Temple 12, where he eventually died. According to legend, the stone that appeared from the baby’s fist resides at Temple 51, called Ishite-ji (石手寺) (which means “stone hand temple”). Near Temple 46, there are eight burial mounds, which are said to be the graves of his eight sons. 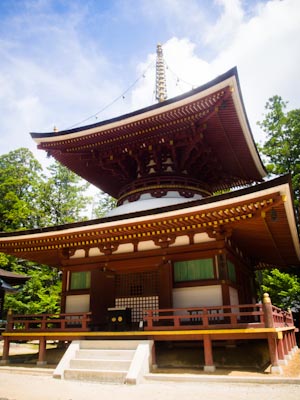 Kūkai’s body was enshrined on Mount Kōya (高野山), located in Wakayama Prefecture (to the south of Osaka). It is the world headquarters of the Kōyasan Shingon sect of Japanese Buddhism. After Emperor Daigo granted Kūkai the honorific title “Kōbō Daishi,” visits to his tomb have proliferated.

The first Shikoku pilgrims were called “hijiri (聖),” meaning ‘wandering ascetics.’ They traveled from Mount Kōya to pay visits to sacred places on Shikoku. Today, Mount Kōya remains a sacred place where Shikoku 88 pilgrims often visit either before or after undertaking their pilgrimage.

The temples and the pilgrimage itself did not resemble their current form until centuries after Kūkai’s death. Before Kūkai’s time, just a few existed as national temples (国分寺) on the island. Others were built near sites from Kūkai’s personal life, such as his family home, the site of his enlightenment, and other places where he performed ascetic practices.

At one point after Kūkai’s death, there were at least 165 temples on the island, with 135 of them claiming Kōbō Daishi as their founder. During the beginnings of the Shikoku Pilgrimage, temples on the island mainly worshiped the Buddhas and Bodhisattvas – not Kōbō Daishi. Temples have since been added and removed from the pilgrimage route. Fourteen of the current 88 temples changed their locations in the mid-sixteenth century.

The popularity of the Shikoku pilgrimage grew throughout the centuries, but came to a major halt after World War II (given Japan’s massive economic blows). As the economy revived in the 1950s to 1960s, infrastructure along the pilgrimage was repaired and improved.

One man in particular – named Tateki Miyazaki (宮崎建樹, 1935-2010) – took it upon himself to clear many of the overgrown paths and modernize routes with the red signs that pilgrims rely on to this day. He was the author of one of the most well-known pilgrimage route guides – 「空海の史跡を尋ねて 四国遍路ひとり歩き同行二人」 – also known as the “Walking Henro’s Bible” (歩き遍路のバイブル). Miyazaki endowed the rights to his guide to Naoyuki Matsushita (松下直行), who publishes the Shikoku 88 Route Guide in several languages and editions.

As Shikoku’s individuals and businesses began to prosper from the pilgrimage, a bus company in Ehime Prefecture introduced the idea of doing Shikoku 88 bus tours. The “henro buses” were a huge success, and grew to become the most popular medium for doing the pilgrimage. They remain so to this day.

Many walking pilgrims are inclined to look down on bus pilgrims – they should not. Although walking the pilgrimage has an undeniable old world allure, those who cannot walk – either for health or practical reasons – still find the bus tour a meaningful experience. To embody the true pilgrim spirit is to accept that everyone goes about their journey in their own way, and to be glad that others can go at all. 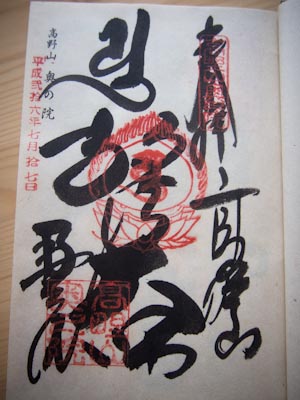 A great variety of bus companies work with the temples and inns to offer packaged tours to pilgrims. If you are walking, expect to occasionally see bus pilgrims queued up at the temple office or chanting en masse.