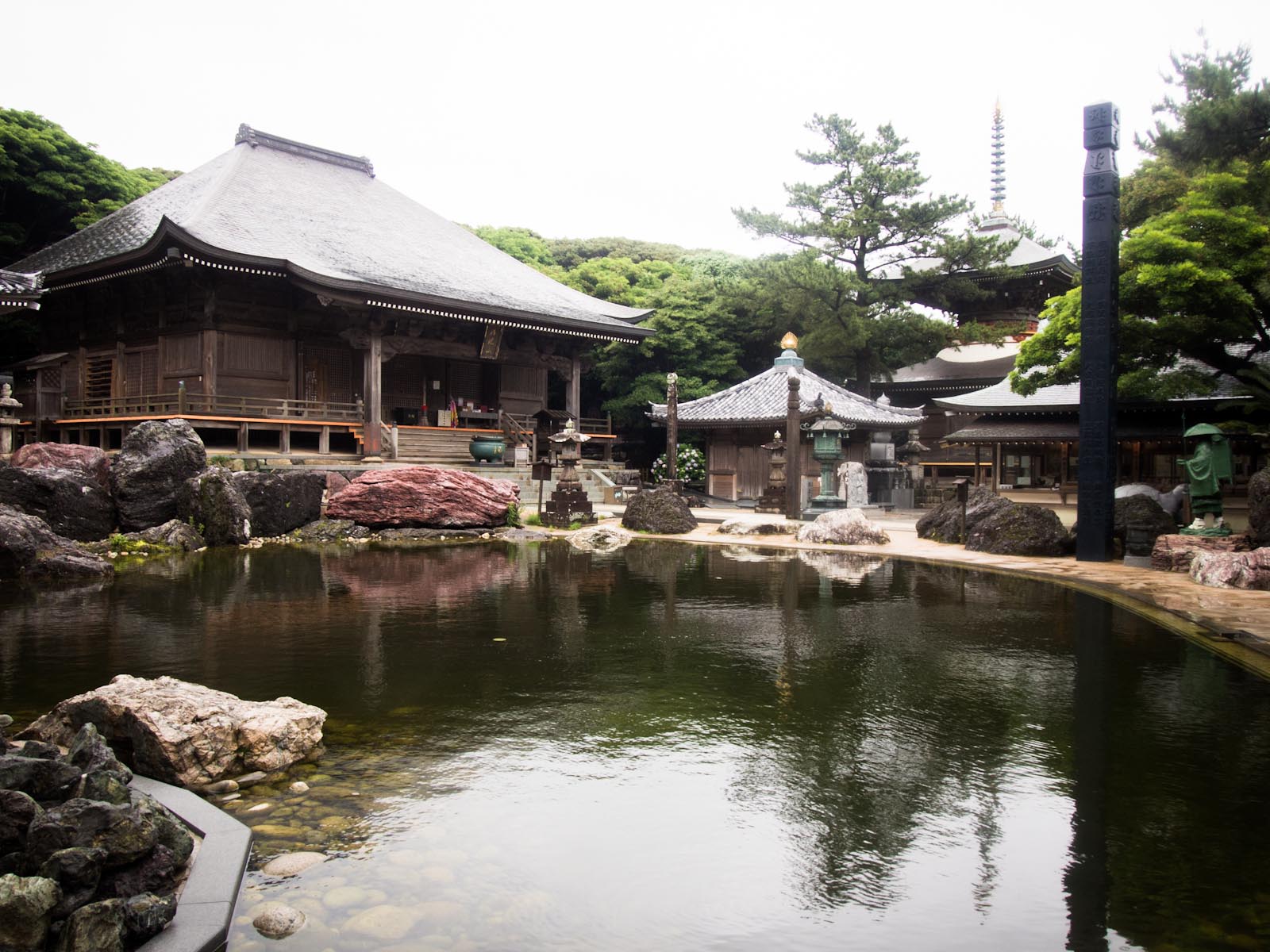 Temples, Shrines, and Religions of Shikoku

88 Temples of the Shikoku Pilgrimage

The Shikoku Pilgrimage is completed by visiting all 88 temples around the island of Shikoku. The main temples of the pilgrimage form a circular shape around the island of Shikoku. Some sit within Shikoku’s bustling cities and villages; others overlook beautiful coastlines; and still others require strenuous hikes to reach them on the tops of holy mountains. Visiting each of them is both a humbling and invigorating task. You can see all temples of the Shikoku Pilgrimage on our interactive map.

A route map to the 88 main temples of the Shikoku Pilgrimage in Japan.

Shikoku’s temples can be clustered together or quite far apart. On some days, you may visit up to ten or more temples in a row. Other times, you may find yourself going days without visiting a single one. One should enjoy these times as a chance to soak in the journey.

The debate around why and how the official 88 temples were chosen (out of many more that claim to be associated with Kūkai and the pilgrimage) is an old one. The most common theory stems from the fact that in Buddhism, human beings are said to have 88 earthly desires, which are also sufferings as our passions lead to unwholesome actions. By visiting the 88 holy sites on the Shikoku Pilgrimage, pilgrims are symbolically exterminating their sufferings.

In Shikoku, the standard pilgrimage route begins at Ryozenji, the first temple. The vast majority of pilgrims walk clockwise around the island, in numerical order. This is considered the “normal” way, but it is not actually necessary to visit every temple in order. In fact, it is not even necessary to start at Temple 1 and finish at Temple 88, so long as you eventually visit all the temples. 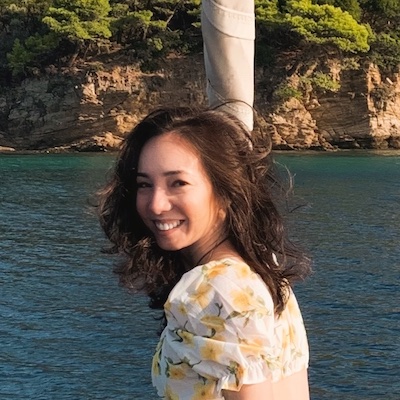 An example: I visited Temple 61 through Temple 63 before beginning the long hike up to Temple 60. The routes just worked out better for my accommodation plans. Since Temple 60 was in the mountains, I wanted to tackle those that were in the city before they closed, and hike early in the morning the next day.

If you start from Temple 1, then your final destination is Temple 88. When you’ve made it to Temple 88 from Temple 1, you’ve arrived at “kechigansho” (結願所), or the place where your vows and wishes are fulfilled.

This is not the end of the pilgrimage. After Temple 88, many pilgrims return to Temple 1 to “finish the circle”.

Many pilgrims do not complete the full pilgrimage in one go. It can be hard to take so much time off work, and people of course have things to attend to back home. For this reason, you’ll often find pilgrims completing the loop one section at a time. This is especially common among domestic Japanese pilgrims, who do not have to travel internationally to reach Shikoku.

One pilgrim I met along the way saw her pilgrimage as a lifelong journey, and was completing it one prefecture at a time, but decades apart. Some pilgrims give up during the especially arduous portions of the trail, only to return later in life – especially during the difficult hike between Temple 11 and Temple 12 and the vast areas of wilderness in Kochi Prefecture, where temples are few and far between.

Although the Shikoku Pilgrimage is focused on the 88 officially designated Buddhist temples, there are hundreds of other temples (and many other religious sites) on the island of Shikoku. These temples are called “bangai (番外),” which literally means they are “outside the numbers” (not among the official 88). Among the bangai, there are 20 recognized “bekkaku (別格)” temples which are especially associated with the Shikoku Pilgrimage. Bekkaku and bangai temples are often impressive and worth visiting while you’re on the trail.

While pilgrims will run into a few of the bekkaku along the main routes, most require extra travel to get to. Visiting them is completely optional as the generally accepted way of “completing” the pilgrimage only refers to the 88 temples.

Just like the main 88 temples, one will still be able to receive a stamp (nōkyō) at each bekkaku. Some even provide lodging options. Information and locations of the 20 bekkaku can be found on our pilgrimage map, or in guidebooks and other online sources.

Each of the 88 temples have (or are associated with) an “okunoin,” or an inner sanctuary that houses a deity. Mount Kōya also has its own okunoin (the mausoleum where Kūkai is said to be resting).

Every Buddhist deity has a legend that can be related to the establishment and mission of its temple, and some bekkaku and bangai are actually the okunoin of one of the 88 temples. For example, at the okunoin of Temple 61 (Kōonji, 香園寺), Buddhist ascetics perform suigyō/mizugyō (水行), a meditative technique that involves sitting in the cold waters of a waterfall (or dousing oneself with buckets of freezing water) to achieve a higher level of spiritual awareness.

Each okunoin is detached from the main location of its parent temple. They are smaller (usually the size of a roadside shrine) and reside either on dedicated temple grounds or in the mountains.

Visiting okunoin is not a requisite to completing the pilgrimage. Although pilgrims seldom visit them, it is worth checking out at least one okunoin.

Occasionally, you will encounter small wooden or stone shrines on the side of trails and roads. These mini shrines usually reflect the nature-worshiping roots of Shinto, which typically incorporate family values and agriculture. There are also Buddhist shrines (like the one pictured here).

Each roadside shrine represents a deity whose identity is depicted by the sculpture inside. A common figure is Jizō, the protector of travelers, women in childbirth, and children.

The two dominant religions in Japan are Buddhism and Shintoism. Compared to Shintoism, Buddhism has fewer religious rites and ritual practices, and places more emphasis on preaching and meditation. Although Buddhism was introduced in the year 552 and grew in popularity, Japan never saw a full conversion away from Shintoism, its indigenous religion. Despite turbulence throughout its storied history, Buddhism was gradually incorporated into Japanese culture and mixed with local folk religions.

Although the temples that make up the Shikoku 88 pilgrimage are all Shingon Buddhist temples (“otera,” お寺), you will often encounter Shinto shrines (“jinja,” 神社) along the way. The main feature distinguishing the two is the entrance: 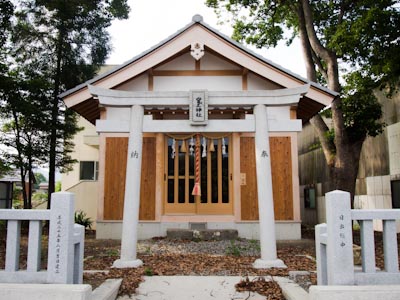 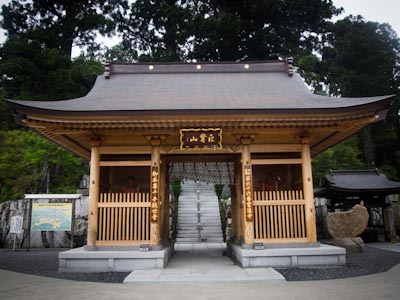 Those entering Shinto shrines must pass through a wooden vermillion gate, called a “torii” (鳥居, pictured top left), while Buddhist temples have a “sanmon” (三門, pictured bottom right) as the entrance to their temple grounds. Pilgrims will encounter quite a few Shinto shrines along their pilgrimage (including a few famous ones!), which are definitely worth experiencing.